A new BESTMAP-funded research paper has been recently published in the Science of The Total Environment journal. The study investigates the accuracy of modelled changes in freshwater provision over time and has been conducted by the BESTMAP members Arjan Gosal, Andrew Johnson and project coordinator Prof. Guy Ziv from the University of Leeds, Paul Evans, James Bullock and John Redhead from the UK Centre for Ecology and Hydrology, Matthew Charlton from the Environment Agency and Prof. Dr. Anna Cord from the Dresden University of Technology. 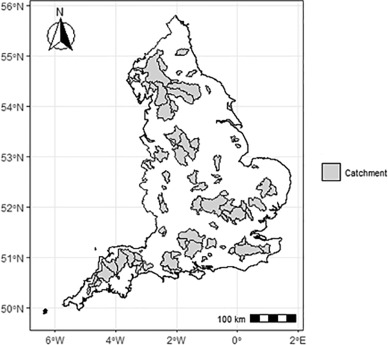 Locations of the 81 catchments (grey) across England modelled in this study.

Accurate modelling of changes in freshwater supplies is critical in an era of increasing human demand, and changes in land use and climate. However, there are concerns that current landscape-scale models do not sufficiently capture catchment-level changes, whilst large-scale comparisons of empirical and simulated water yield changes are lacking.

Against this background, the authors have modelled annual water yield in two time periods across 81 catchments in England and validated against empirical data. Their objectives have been to investigate whether modelling absolute or relative change in water yield is more accurate and to determine which predictors have the greatest impact on model accuracy.

The results from the study suggest that modelled absolute values need to be presented alongside percentage values when quantifying change in freshwater provision. The use of each will thus depend on the context and purpose of the particular management decision.